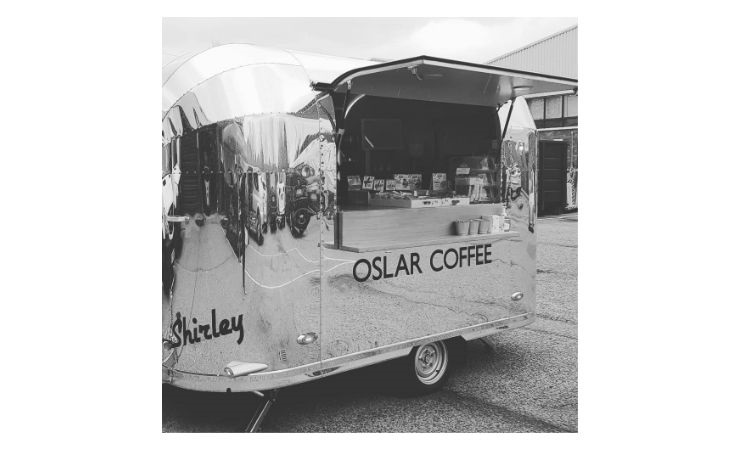 The ability to adapt and change your business model when things aren’t working or when you want a change in direction is vital in lots of businesses. When Oslar Coffee proprietor Jason decided it was time to take his coffee business in a different direction, he sold the shop in Wokingham as a going concern and took his coffee mobile.

Jason chose an airstream because of its looks, knowing that the look would help get him into car events and festivals. Similarly to the shop Oslar Coffee had started in, Jason wanted a unique look which the Airstream provided. Later bookings would prove this uniqueness as an absolute asset, as clients have hired Oslar Coffee based solely on the look of the airstream.

Again, Jason wrote a project plan, taking all the aspects that worked from the Wokingham shop and injecting them into Shirley, the Airstream. In hindsight too much was spent on the Wokingham shop in the outset and it was Jason who injected the start up cash. This time Jason decided to choose commercial finance from Lloyd’s and had Shirley built by Rocket Caravans to his specifications. Electing for the smallest, most lightweight Airstream on the market so he could handle her on his own, Jason chose good looks and value for money.

As with any business, customers are key, and once he had relocated to a mobile airstream, Jason needed to build a new customer base. Shirley was delivered shortly before COVID hit, however, because Jason brought the Oslar Coffee brand with him from the shop he was able to drum up business using social media. Initially during the first Covid lock down, Jason offered a coffee delivery service. In the first 15 weeks, Jason personally delivered coffee to 3500 customers.

A change of scene for Jason and his wife as later that year they moved to the south coast. Jason continued to use social media to publicise his stunning airstream coffee set up. He used mainly Instagram, but also other popular social media sites, along with sites such as Add to Event and Poptop, which are digital concierge services. Phone calls of bookings began coming in because of the digital work Jason had put in.

Branding has proved important to Oslar Coffee, the logo and brand have held consistent throughout all the changes. The original shop was sold with a caveat that the new owners had to change the name. Thus enabling Jason to keep the Oslar Coffee trademark. The airstream is Oslar Coffee branded, as is Jason’s t-shirt uniform. Everything done digitally, social media, website etc. is brand consistent.

With Jason’s background in IT, he is very acquainted with the digital needs of business development. Oslar coffee is found on all the main social media platforms, Facebook, Twitter etc, but Jason’s social media of choice is Instagram. Google is kept up-to-date as Oslar Coffee maintains its presence on Google, as well as the recent reviews Jason was able to carry over the shop reviews when he moved to the airstream. However, the review platform TripAdvisor was lost when the business became mobile as they only review companies with fixed premises. Oslar Coffee had prided itself on maintaining a number 1 slot on TripAdvisor in Wokingham for 7 years. Jason’s IT abilities has enabled him to do a lot of background keyword optimisation on his website, which keeps it near the top of searches and enables potential clients to find him easily.

Although traditional word of mouth is of course massively important for future bookings, the maintenance of a business digital footprint and the manipulation of this through changing metadata has been one of Jason’s top priorities. For example, the Oslar Coffee website has been optimised for the words “best coffee in Hampshire.” Social media continues to be important for new custom, some of the business calls have come directly from the images clients have seen of the Oslar Coffee airstream at past events.

Up to date since going mobile, Oslar Coffee has appeared at various motoring events for dealerships like Porsche, Ford, McLaren and Kia, the sleek airstream fits in well with the show cars. The biggest events so far have been Goodwood, Super Car Fest and the Festival of Speed, the latter catering for 3000 people in the four-day event.

As well as the appeal for car events, Oslar Coffee has begun to get bookings for corporate events, recent examples include Prestige Telecom, Charles & Dean Finance, Sunbelt Rentals UK & L & W Contractors, who have all hired the glossy airstream for their business occasions.

Shirley’s slick appearance and mood lighting is becoming popular at weddings. After photos of a last minute booking from a happy couple last year made it up to social media Oslar Coffee now has another spree of weddings booked in for 2022. Including a celebrity glamping wedding in Cornwall later in the year, even Jason doesn’t know who’s wedding this one will be until the day!

To illustrate the power of the digital footprint, from a profile Jason put up on Poptop, a digital concierge service, a call came in from an assistant of the actor Luke Evans. Once over the surprise, Oslar Coffee agreed to a few days at a film set in Cardiff providing coffee and Italian pastries to the cast and crew.

Even though all that the classy airstream Shirley has known is Covid and its aftermath, Oslar Coffee and the brand have continued to go from strength to strength. Now with less overhead, no staff, rent or rates and even with the obvious drop in potential earnings, Jason enjoying building this new chapter in Oslar Coffee’s journey. We at Duport look forward to keeping up with you on Instagram.

“If you’re wondering about the Giraffes on the logo, it’s just because I love Giraffes. I’ve got two dogs but if I could have a Giraffe trust me I would!” Jason.

If you’ve enjoyed this story, we have a range of similar articles on this subject. Here are a few of our favourite articles from this category.

How to market a solicitor’s firm

How to market a solicitor's firm: last time we met Christian we talked to him about why he

This Month Duport went to meet Christian, a Private client solicitor who took the plunge