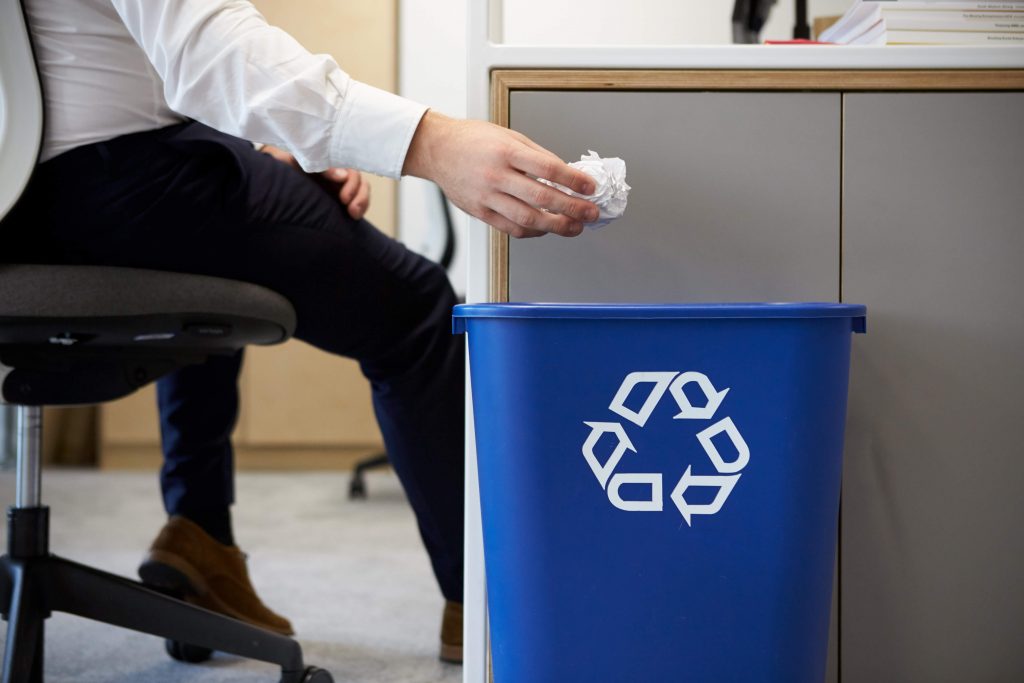 When it comes to recycling most of us know the relevance of a pink sack or a blue box as opposed to a black sack … or at the very least, where to put your smelly rubbish and where to put your cardboard and plastic and if you don’t, then you really are way behind the times. But for every one of us who abides by the recycling rules at home, how many of us bother to think about it in the workplace? I would wager a guess that most of us don’t using lame excuses such as ‘it’s the boss’s job to tell us to do it’ rather than simply suggesting it or taking charge and implementing even a basic recycling system.

Throughout the working day cardboard, paper, plastic cups, cans, glass, light bulbs, ink cartridges, stamps, CD ROMs, magazines, newspapers and telephone batteries could pass through the hands of office staff and all of these items could be successfully recycled rather than ending their life in between food scraps and used tea bags. But do you even have a recycling bag or box located next to your bin to deal with these items? If not then start by conducting a waste audit to find out where you produce unnecessary waste in the first place then from this identify where you need to focus your attention. In a small office where there may only be a handful of people a simple option may suffice such as organising a recycling area and each week nominating a person to take it and leave out with their home rubbish. However, if you are part of a larger office then a full scheme needs to be implemented and this can be a little more difficult. Don’t be put off though as once it has all been worked out, recycling can be run like clockwork.

Firstly it would be advisable to set up a pilot scheme on one floor or in one office, for instance. Find out who will take your recycling away and when, establish how they will take it and then designate an area to try it out. The most important step to take when setting up the pilot scheme is to communicate your intentions to all staff. Hold a meeting where you outline exactly what you are going to do and how and produce some literature, even if it’s just some posters, outlining steps to assist with recycling such as:

By making recycling seem as simple and quick as possible people will be more inspired into taking part I mean, let’s face it, a worker on a quick break is going to be more inclined to put their plastic cup in the pink than in the black if they can see it is quick and easy. The secret? don’t over-complicate matters!

Once you have set up the simple steps such as communicating your plans and arranging pick-up of recycling, the ball should be rolling at a good pace. The only thing you will need to do is find out about specific items such as cartridges and CDs, which might require a different mode of transport to their final destination. Contact your local authority if you’re stuck but don’t panic as there is a company to take everything away now and most importantly, don’t forget to keep on the case within your building; enforce regular reminders or display ‘achievements through recycling’ on communal notice boards to motivate and encourage continuation.

Never has the state of the environment been such a part of everyday living but now that it is, the importance should not just be on our homes but also on the environment we spend most of our waking hours.